For those of you following our road trip journey, we’re sorry we left you hanging after Spokane. When we left Spokane to drive to Edmonton and we’re expecting a nine hour drive. Well that didn’t happen. What we forgot to factor in was the fact that we entered MST and basically lost an hour, and we’d have to slow down to a snails pace when going through all those teeny tiny towns that no one’s ever heard of. The guys at the A&W we stopped at were THRILLED to see girls they weren’t related to. Sorry, but it’s true! haha.  So, instead of taking nine hours, our drive was a little over 12 hours. YIKES.

You can imagine we were going a little stir crazy by the end of the day. And once we got to Edmonton it was jam-packed with seeing family, and cleaning out storage units. We barely had time to think, let alone write about our journey! So here it goes:

The first part of the drive from Spokane to the Canadian boarder through B.C. was stunningly gorgeous. The mountains were absolutely beautiful and the air was so clean. As native Angelenos, we’re not used to such clean air, it was almost too much to handle!

After almost 6.5 hours of driving, we finally switched in Crowsnest Pass. By this time, we were both pretty worn-out but we knew we had to keep going. We read that there was SNOW(something us Cali Gals don’t know how to deal with) coming and we didn’t want to be caught in that.

So we kept going, and all of a sudden the the beautiful mountains disappeared and we were surround by flat, farmland, and a giant sky with nothing for miles. No offense to Alberta, especially the drive from Calgary to Edmonton, but jeez, it is sooooo boring. We were both nodding off, eek. Even driving from Edmonton to Calgary today, we were both zoning out and having a hard time staying awake and it was only 3ish hours. But now that we are in our very nice hotel in Calgary, we are able to sit, not talk, and enjoy mindless TV and writing.

Okay, back to our journey: As we were driving into Edmonton there wasn’t a cloud in the big sky! It was beautiful. We thought the weather man must have been crazy; how could there be the chance of snow? Well, we arrived in Edmonton at the Cedar Park Inn, and the temperature was MUCH cooler than we expected. But still, didn’t look like it was going to snow. 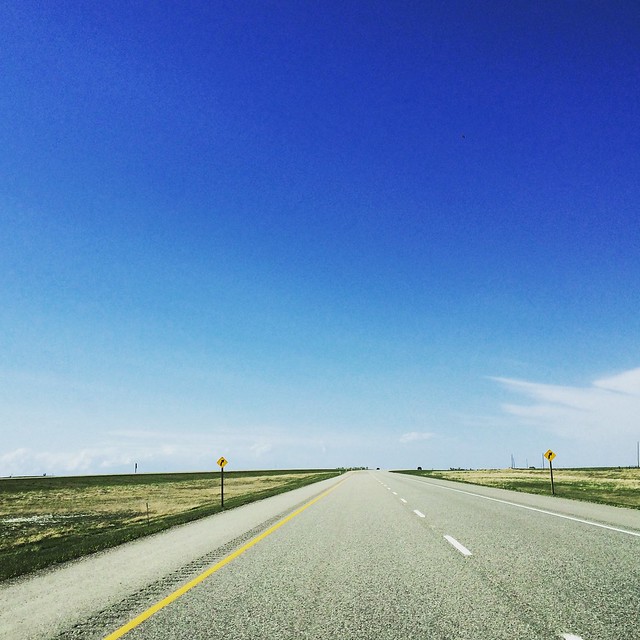 We went to sleep and the next morning we woke up to a freaking Winter Wonderland. Obviously, Edmonton didn’t get the memo that Spring was here. Our poor car, Snoopy, looked cold yet majestic in the snow. Probably the first and only time Snoopy will see snow. 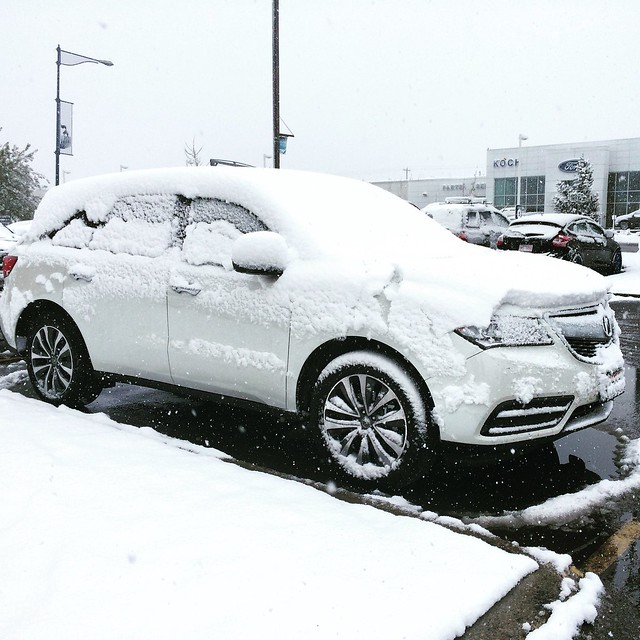 Here’s Snoopy, covered in Snow. In May. WTF 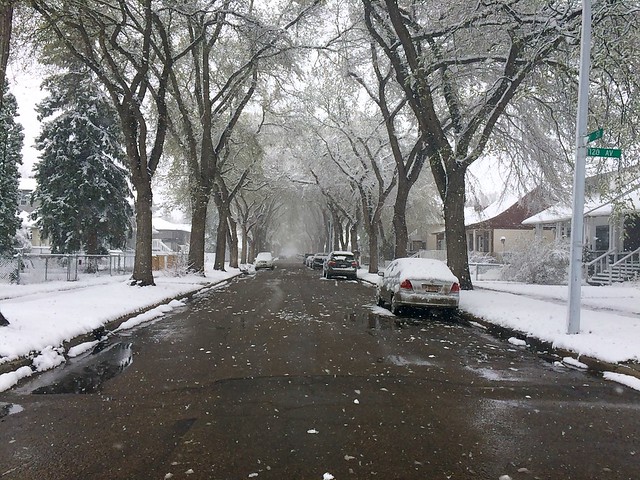 A Winter Wonderland in May. Fun fact, minus this snow, Spring in Edmonton is basically Winter in LA. 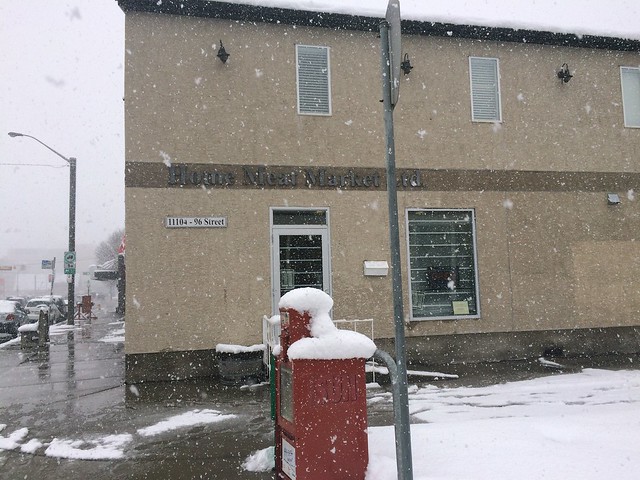 Look at all that SNOW!!! 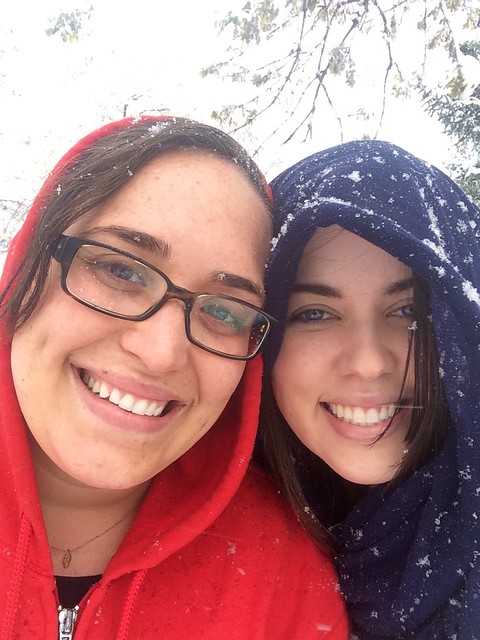 Two Young Ladies in the the Snow! Aren’t we adorable? 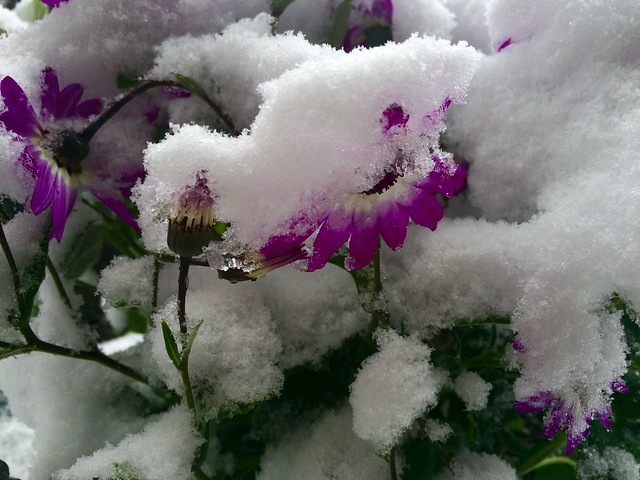 Over the week, we met up with many family members and had tons of meals, including a daily trip to Tim Hortons for coffee and Tim-Bits. Now, we’re going to be honest, a lot of the area we were in is a food desert (basically meaning there is nothing but fast food around), we found a few places that we liked, Moxie’s and Earls, but who knows how healthy it was for you. We were talking about how almost everything comes with fries. We need some green veggies STAT!

Anyways, we had some good meals and discovered a few new awesome things like Sesame Steak Sauce. At first we were concerned when we saw this white steak sauce coming out at a BBQ, but everyone swore that it’s amazing, so we reluctantly put it on our plates to be polite, like our fellow Canadians. It was love at first taste! Holy Smokes! We would have licked it off the plate if no one had been looking at us (Christie tried). So we decided we have to make it, so stay tuned for that and many other inspirations we got from this trip, coming up in the next few weeks. We promise you that you won’t be sorry.

We’re heading back to the states today! Heading from Calgary to Helena, Montana! Canada it’s been real, but we will see you in a few months. Time to head back to the motherland!