We told you a few days ago we wanted to share some of our favorite LA Eats with you, for those who either live here or those who are traveling to here. We were originally going to do like a top five list in each category of food (Indian, Mexican, Chinese ect.)  but there are just too many good restaurants here, that we just thought we’d do a feature on each one as we see fit. And we do have a lot of favorite restaurants.

We wanted to share a little secret with you: Kettle Glazed Doughnuts.  They have some of the best donuts and Croissant-style donuts around. We’ve never tried the original at the Dominique Ansel Bakery, but we’re confident that the Kettle Glazed version would stand up tall next to the famous trademarked version.

PS: You might notice two spellings of donut/doughnut. This is because we personally use the spelling donut, but wanted to respect the titles of the doughnuts according to Kettle Glazed. 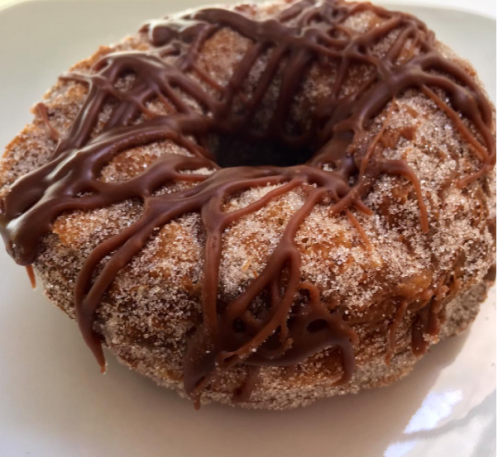 Box of beauties below! 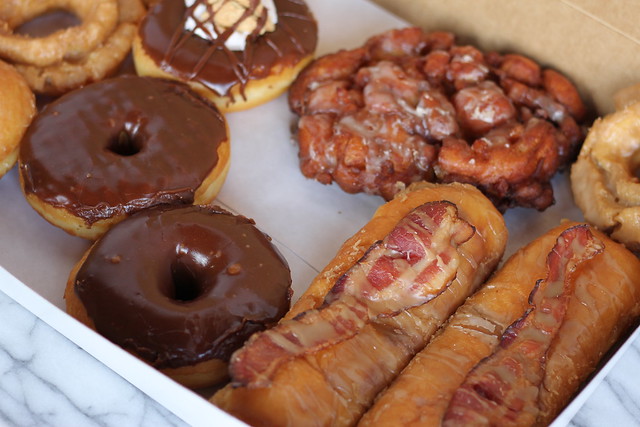 END_OF_DOCUMENT_TOKEN_TO_BE_REPLACED

After 11 days of recipes and tricks, today we are taking the easy way out and sharing one of our favorite LA (Burbank) Eats. We actually discovered this place while babysitting and had been passing it by for years but never gave it a second glance because we just assumed it was an old people diner.

The restaurant we are speaking of is The Tallyrand located in Burbank on Olive Blvd. 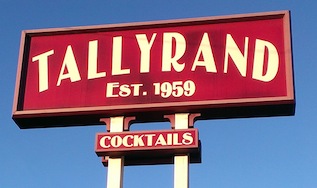 Now, you may judge it on it’s dated exterior and typical “diner fare” but this place is truly a hidden gem. In a couple weeks we’ll do a full write up, but for now we’re going to talk about our favorite “stoner” dish: CHICKEN FINGERS. WE love chicken fingers and are always on the hunt for the best! When we came across the Tallyrand and we saw their chicken fingers, we knew it was love at first sight. 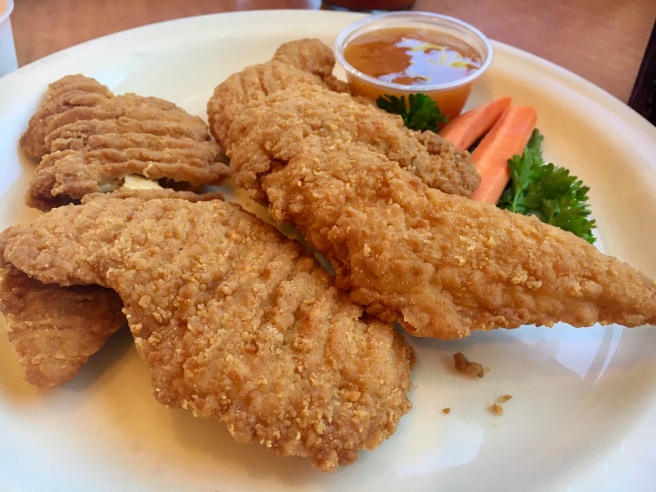 Perfectly crispy chicken, with an assortment of dipping sauces (BBQ, Honey Mustard, and Ranch with hot sauce) and hot and crispy fries.

You know it’s going to be good, when they throw some decorative parsley on the plate. 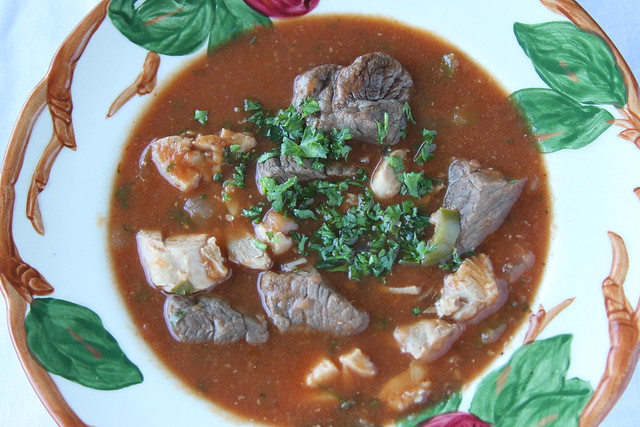 One thing about us is we love to watch TV and Movies. I mean, we went to film school so it’s not completely out of the norm for us to love watching and analyzing our favorite shows and movies. And one of our all time absolute favorite shows? Gilmore Girls.

We’ve both been watching Gilmore Girls since it’s original run and have rewatched so many times we’ve probably lost count. When the show sadly ended it’s run in 2007, that while it wasn’t the ending that we all wanted, we knew it wasn’t the end. I personally remember Googling “Gilmore Girls Movie” and “Gilmore Girls Reunion” every couple years because I knew it would happen. And last year, when they FINALLY announced that it was actually happening, we were both freakin’ thrilled.

And then, earlier this year, I remember a post on Facebook about a Kickstarter for a Gilmore Girls Cookbook…say what? Gilmore Girl inspired recipes? Shut the front door and sign me up! Which we immediately donated to Kristi Carlson, the incredible woman behind Eat Like a Gilmore: The Unofficial Cookbook for Fans of Gilmore Girls. And finally, after what feels like forever, the book is almost here. And when Kristi asked if there were any bloggers who wanted to try a recipe…we obviously jumped at the chance.

We were fairly open to whatever recipe Kristi sent us and when we finally got the recipe we would be testing, we were a little shocked and kind of scared. Mock Turtle Soup. A name and recipe we were only familiar with when we watched the show and thought to our selves, “what the hell is that”. And then proceeded to google and be totally grossed out. We had similar thoughts when googling and researching the origins of “Johnny Machete” and most times we were turned away and continued with our watching. So when we got Mock Turtle Soup, we were kind of afraid. But thankfully it’s MOCK turtle soup and there is no actual turtle in the soup! Phew! *Wipes sweat off brow*

Kristi’s Mock Turtle Soup is a tasty combination “land-etarian” friendly eats. The soup itself contains chicken thighs and beef and is filled with tomatoes, eggs, onions and peppers. It reminds us of a cross between a beefy stew and sexy gumbo. Yes, gumbo can be sexy.

The recipe itself was quite easy to follow and even though there were a lot of yummy ingredients and you have to pay attention so you don’t loose track, the results were great! The soup was quite hearty and very filling. We can see why it was a Richard Gilmore favorite.

When we finally received our copy of the cookbook this week, we were thrilled. So many fun recipes! And we can’t wait to test, taste and try them all! Kristi, we will gladly come and cook with you anytime! Solidarity Sister! Ya Ya!

Below are some pictures from our cooking adventure. And though we won’t divulge the actual ingredients and steps so that you order your own copy, we can share how much we enjoyed the recipe and the process. 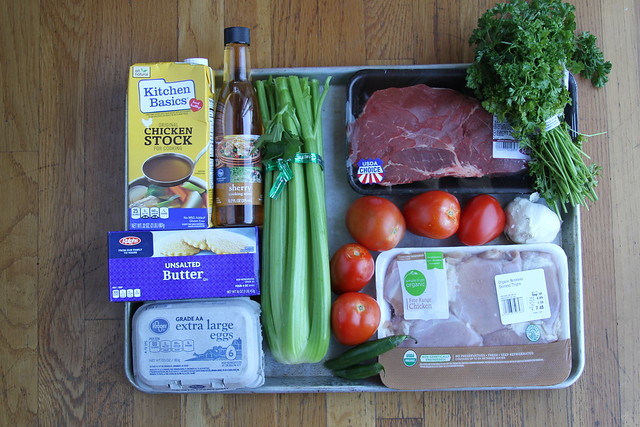 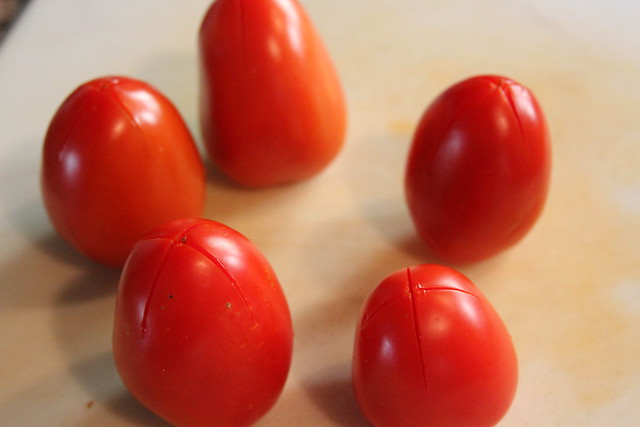 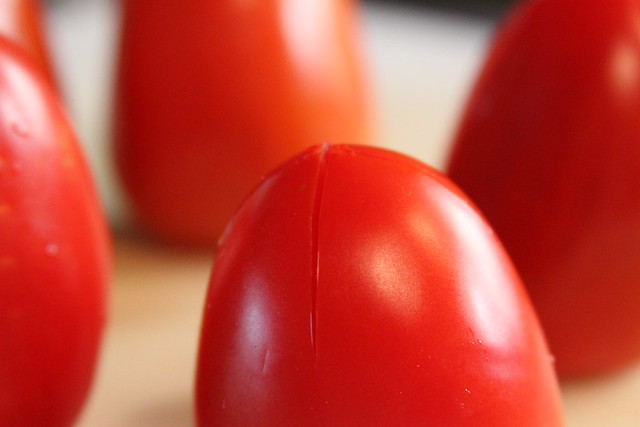 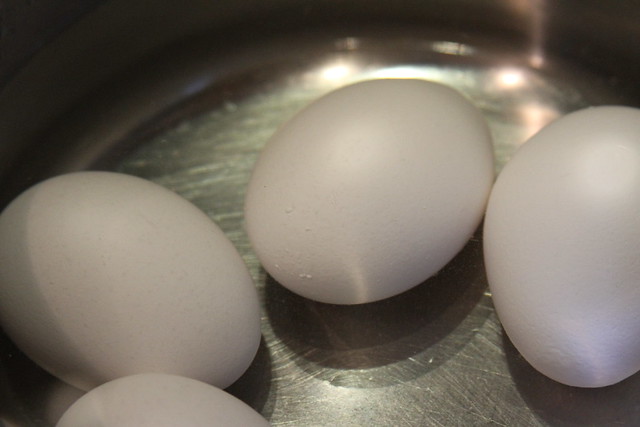 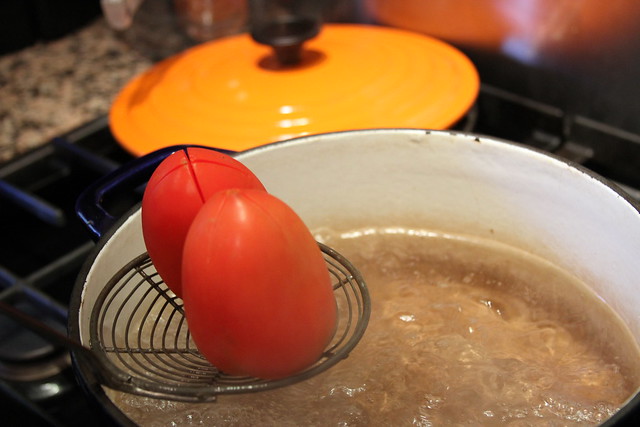 Tomatoes getting ready for their bath! 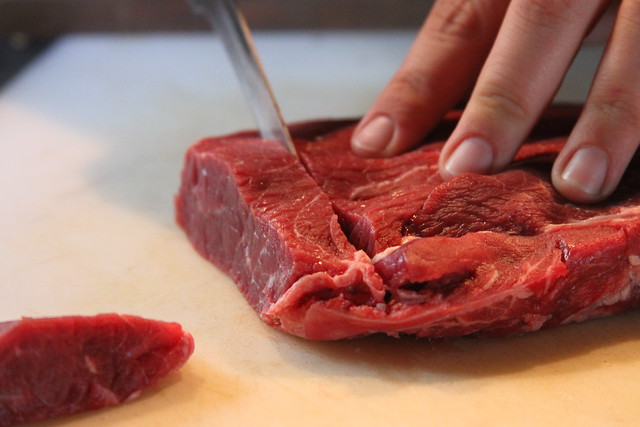 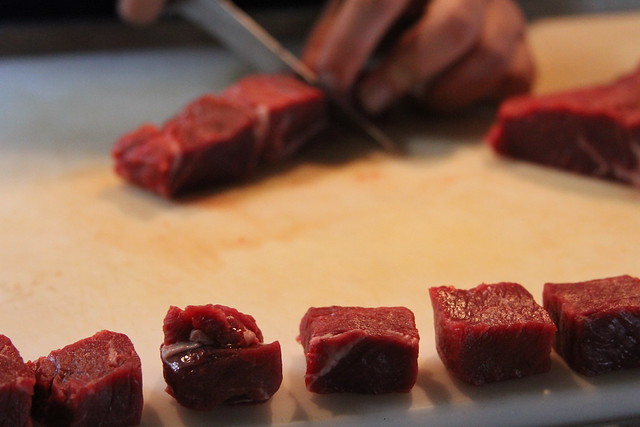 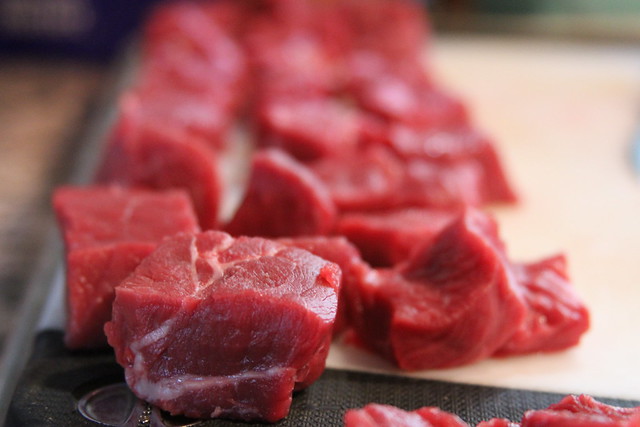 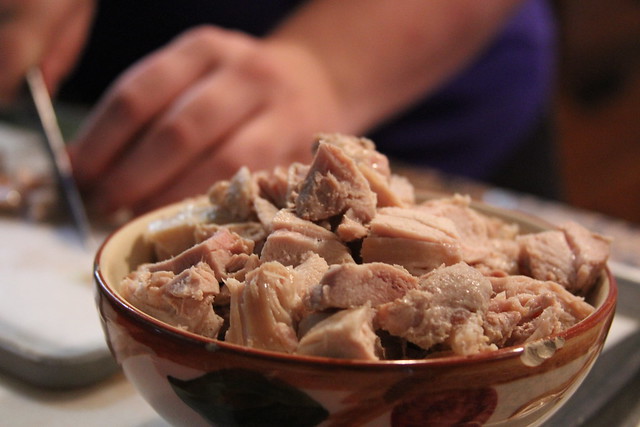 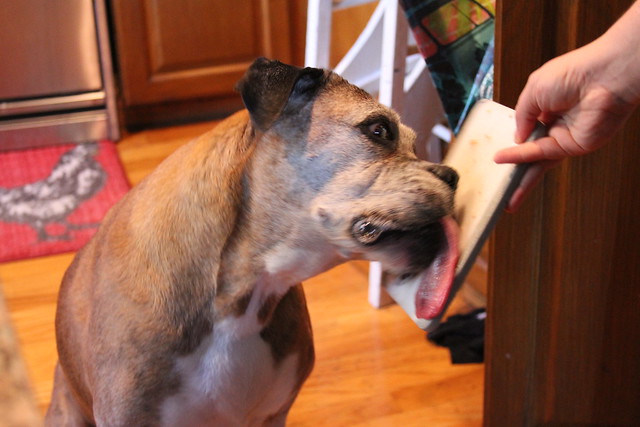 Peaches, our official taste tester, loves licking the chicken board. 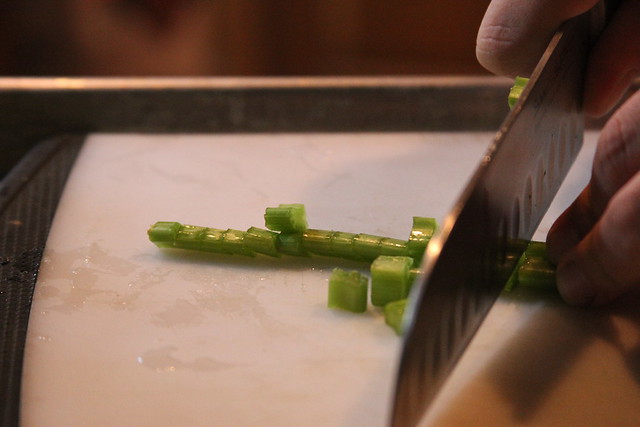 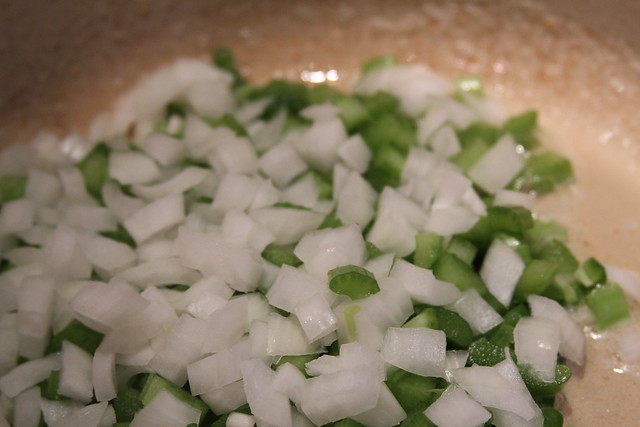 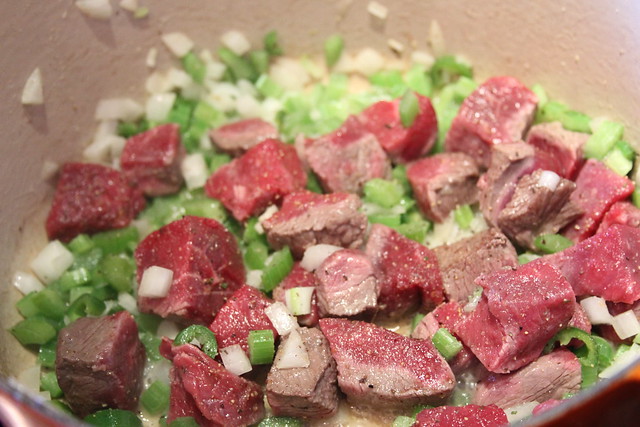 Beef and veggies getting to know each other. 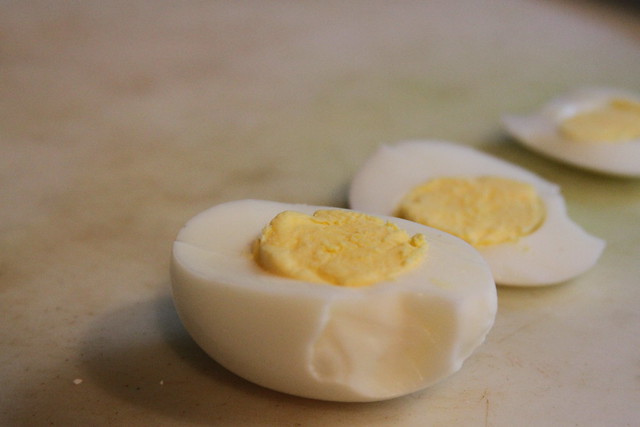 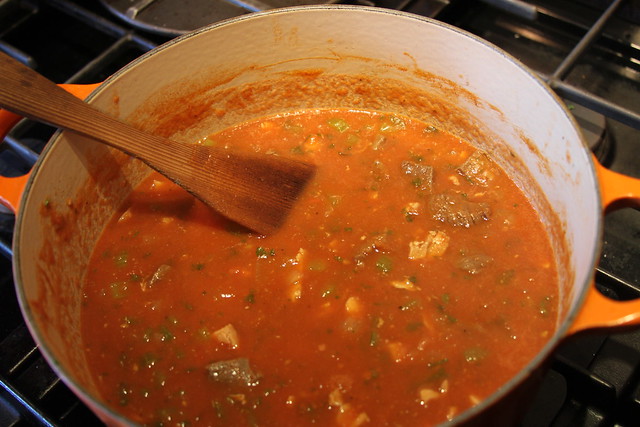 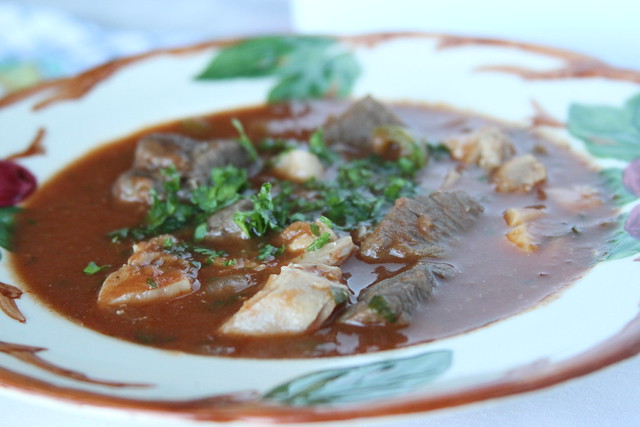 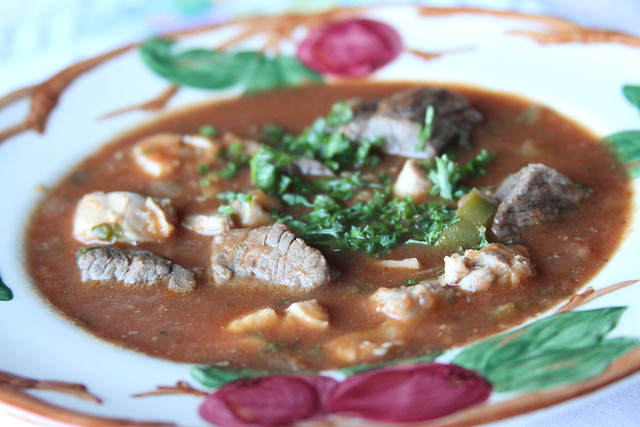 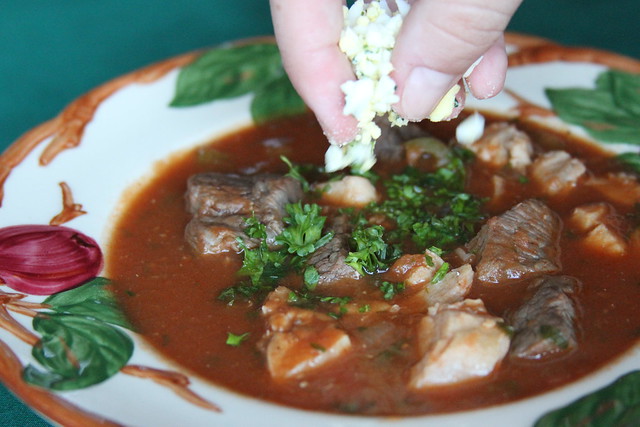 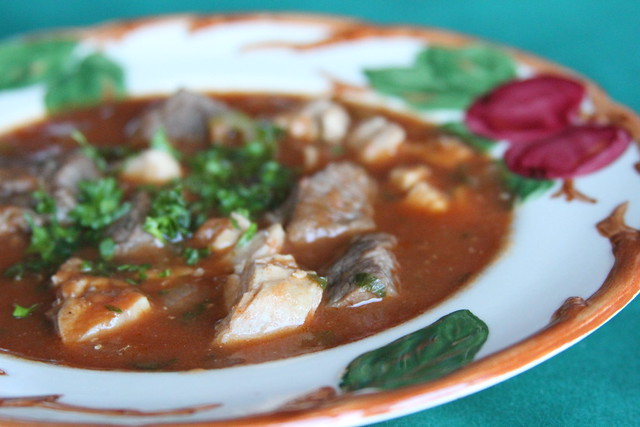 I hope for all your super hardcore Gilmore Girls fans out there, you notice that we have the same plates that Babette has when Rory cooks her Donna Reed Dinner for Dean (ick…we’re Team Logan in this household).

It’s hard to tell in this photo, but if you go back and watch you can actually see this plate patterns a couple of time. And we only know this from watching the series twice this year. We actually started earlier in the year, and got to season five and said we would wait until the premiere date was closer, and as the date drew closer, we just decided to start over again. We powered through and are now in the middle of season six, and counting down the days until November 25th.

Bonus, here is a bad photo of Rory  and Dean in the Donna Red episode holding our vintage plate ware!