Today’s recipe is a delicious and simple way to add some extra flavor into your life. Blueberry Compote! A compote is actually the French word for “mixture” and is made up of fruit in a sugar syrup. Apparently, a compote dates back all the way to Medieval Europe, where they would chill the compote and eat it at the end of the meal.

So, here’s the history on blueberries. Apparently, they are native to North America, along with the cranberry and concord grape. The Native American people considered the blueberry a gift from the Great Spirit and they should, they’re amazing! When the New England settlers arrived, they tried and failed at the agriculture game because it wasn’t local…Sound familiar? Anyway, the Native Americans taught the settlers how to grow corn and blueberries, among other staples in the Native American diet of the time. Not only did they like eating blueberries, but they had many uses for them such as medicinal uses and dyes. So hail to the Blubs!

You can also make this ahead and then freeze for a later day. It’s really up to you. 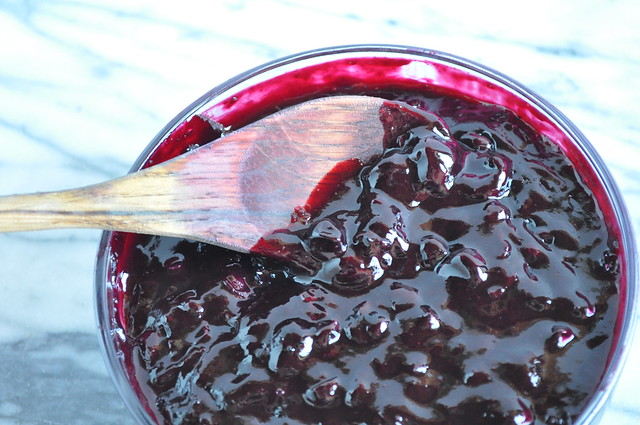 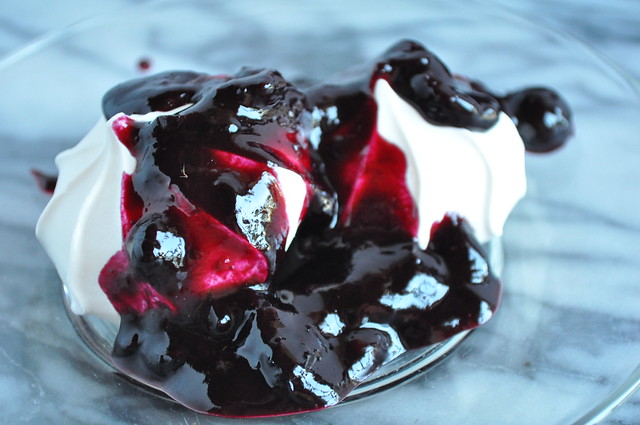 In a medium sauce pan, combine the blueberries, sugar, vanilla, cinnamon and orange juice. Bring to a boil. 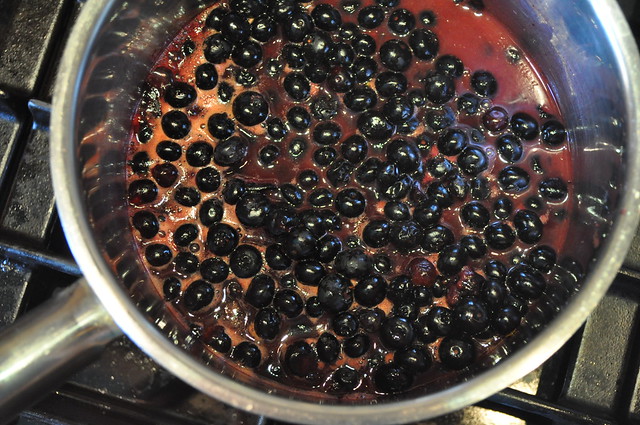 In a small bowl, mix together the cold water and cornstarch.

Add the cornstarch mixture to the blueberries. Mix until combined.

Cook over low heat until the mixture has thickened and coats the back of a spoon, about 3 to 4 minutes. 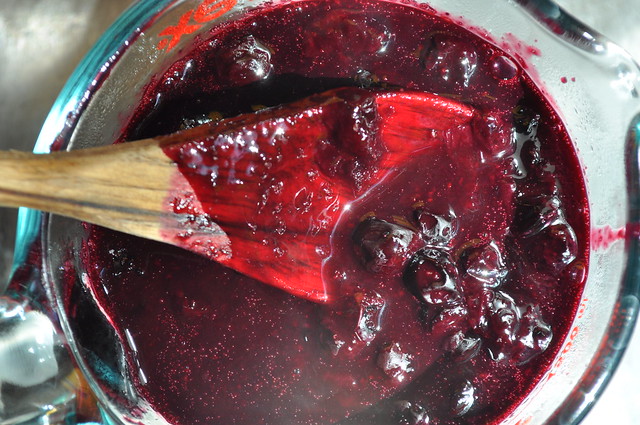 Remove from the heat and and let cool to room temperature.

Can be served on anything, it’s that good! 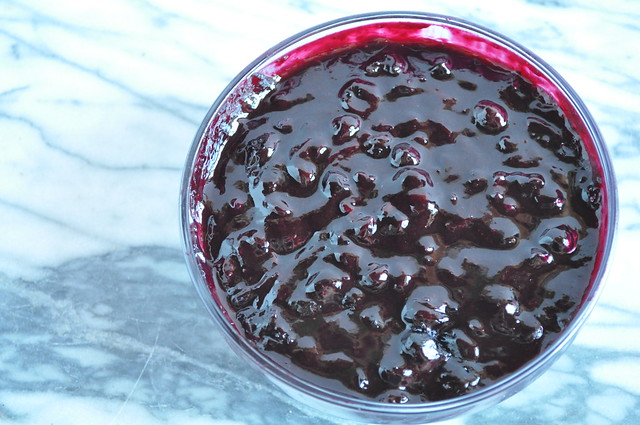 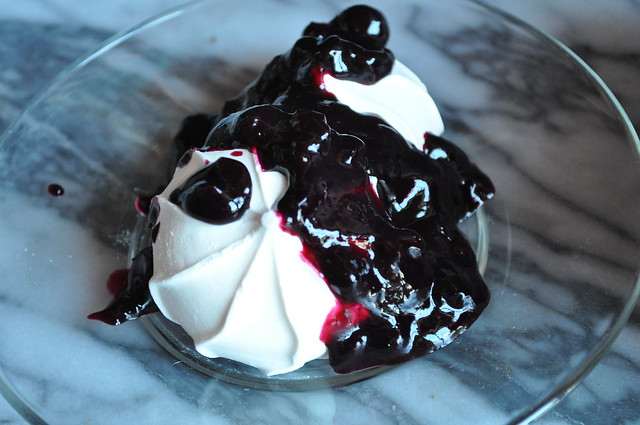 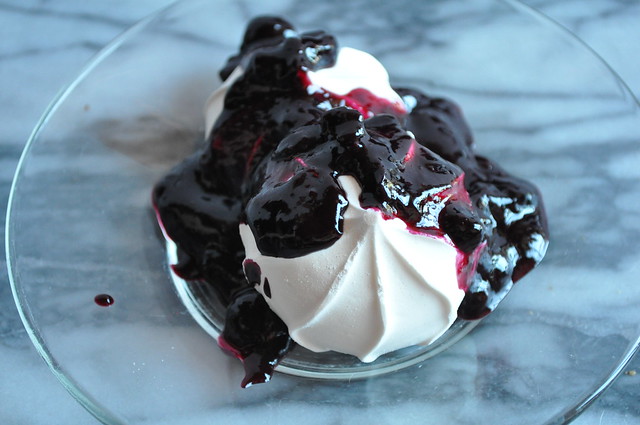 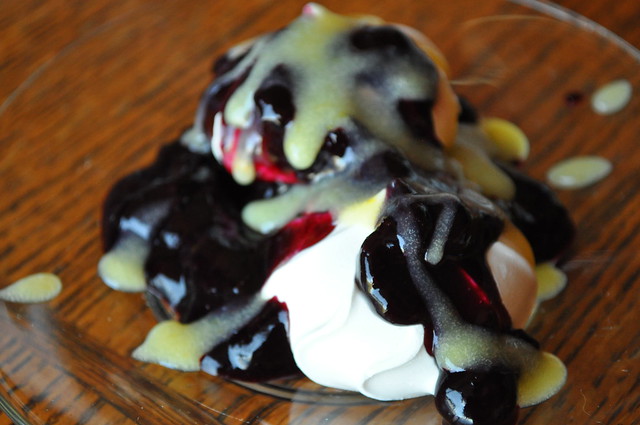 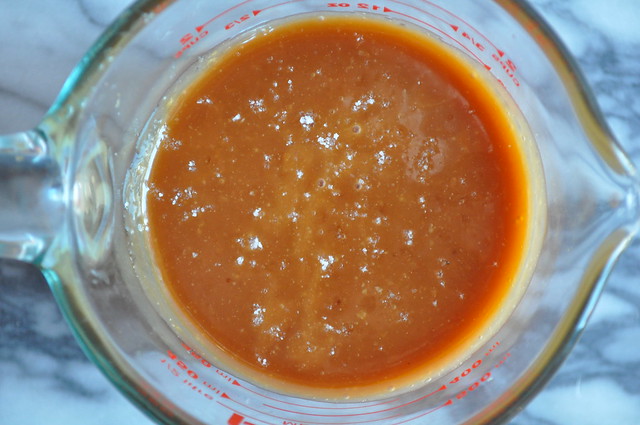 It’s still too hot here in LA to be in the kitchen, so for today’s recipe we have a almost foolproof Salted Caramel. We’ve come across so many caramel recipes and they never turn out right, but this one, this one is AMAZING.

We’ve made this caramel multiple times and every time it’s perfect! We think it has to do with the warmed cream that you pour over the sugar and water. We promise you this recipe is nearly foolproof and everyone can make it!

In a medium sauce pan over high heat, dissolve the granulated sugar and water. Stirring constantly.

During that time, if the sides of the pans have sugar that start to crystallize, use a pastry brush dipped in water to remove the crystallized sugar.

Continue cooking until the sugar starts to turn a deep amber color. As soon as it starts to turn, remove from the heat, immediately.

Very carefully and slowly, pour the hot cream into the sugar mixture whisking/stirring constantly. Don’t be alarmed when this mixture starts to bubble, just keep stirring.

Next, add the butter and a pinch or two of the fleur de sel salt. Stir until smooth. If desired, add 1/2 teaspoon or so of vanilla extract.

Move to an air tight container, and allow to cool before placing in the fridge.

You’re welcome. If these are 5 of your favorite words, then you might be Paula Deen.

This recipe is made with love, so naturally that means it doesn’t have calories. 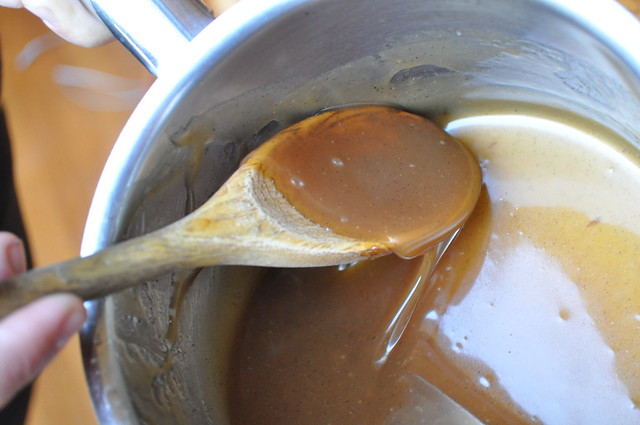 Melt butter in a saucepan. Then add the brown sugar, keep stirring!

Let it all meld together, then take it off the heat and let it sit for a minute.

Add heavy cream while stirring, then VOILA! It is done and once it’s cooled some, taste it! Don’t taste when it’s hot, otherwise you’ll be calling it your favorite mistake, yup that what Sheryl Crow’s song is about. 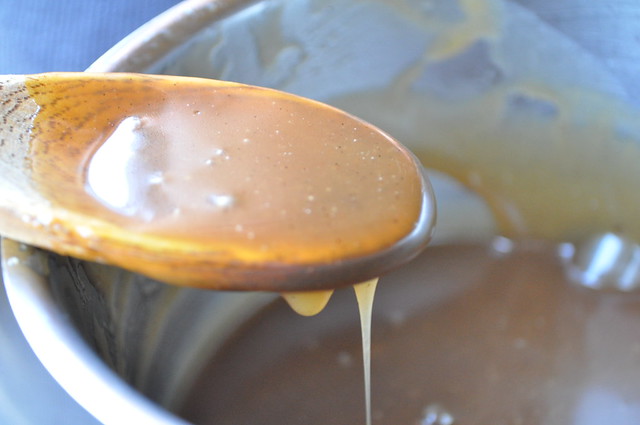 This curd may be one of the best things we have ever made. And the recipe comes from the Queen Ina Garten, so you know it’s good. And it’s easy.

Last week when we were shopping we saw Meyer Lemons, and this is first time we had seen them in the market so we obviously bought 6 bags of lemons not knowing what we were going to do, but we knew it would be something amazing.

This recipe was the first of many Meyer Lemon Recipes that we will be sharing. We’re honestly looking into buying a Meyer Lemon Tree so we have unlimited Meyer Lemons.

This curd is probably one of the best things you can make with these lemons. It’s so good, you can just eat it with a spoon or on toast. 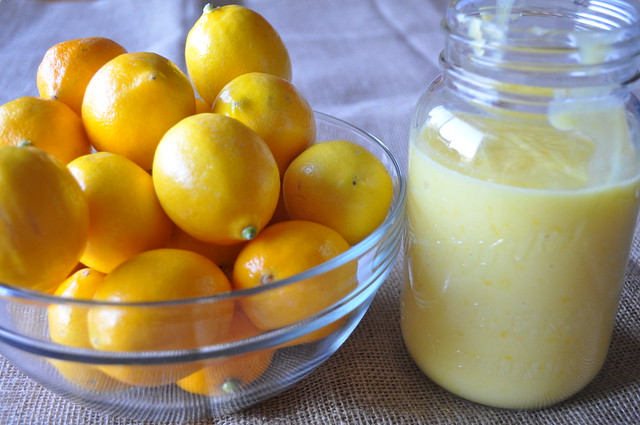 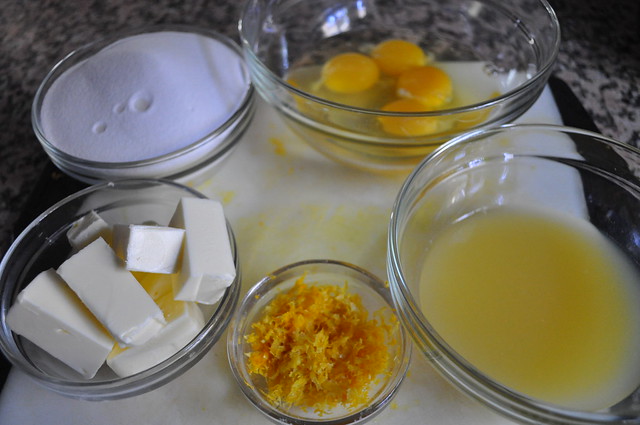 Because Meyer lemons are smaller you need more to make this curd, zest the lemons and try to avoid zesting the white part of the lemon, which is called the pith. After you zest the lemons cut the lemons in half and juice them. 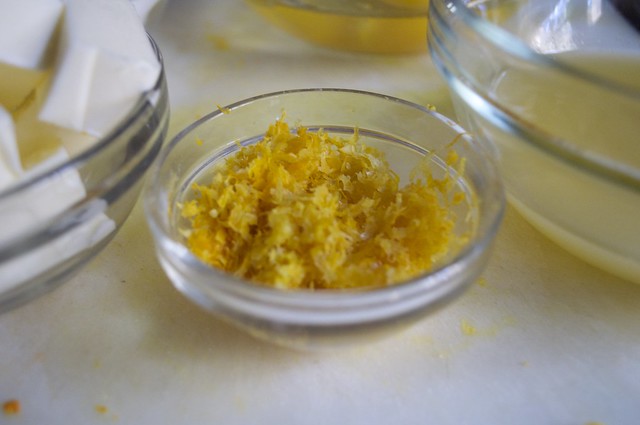 In a food processor pulse together the sugar and lemon zest until the lemon zest is fully incorporated to the sugar. The sugar will have a “damp” texture. 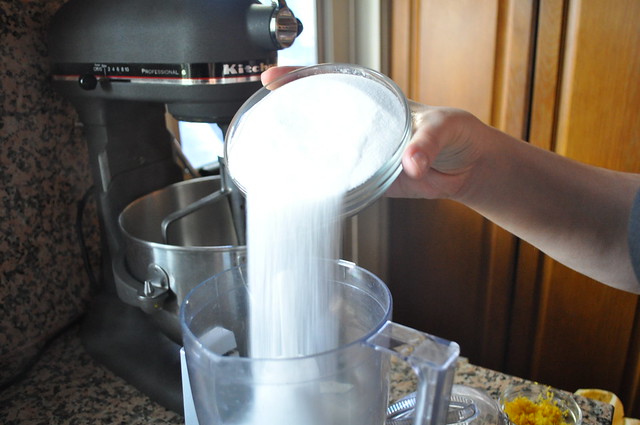 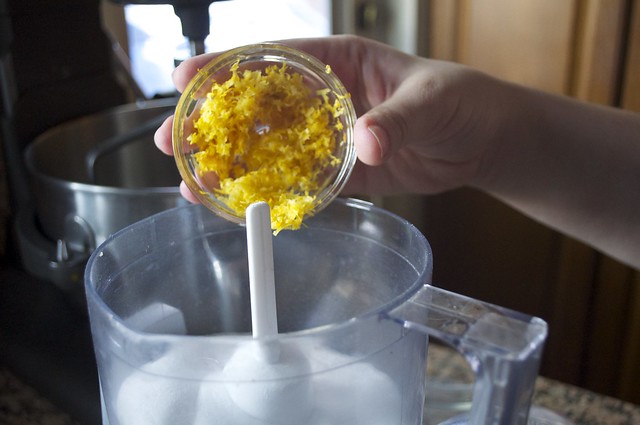 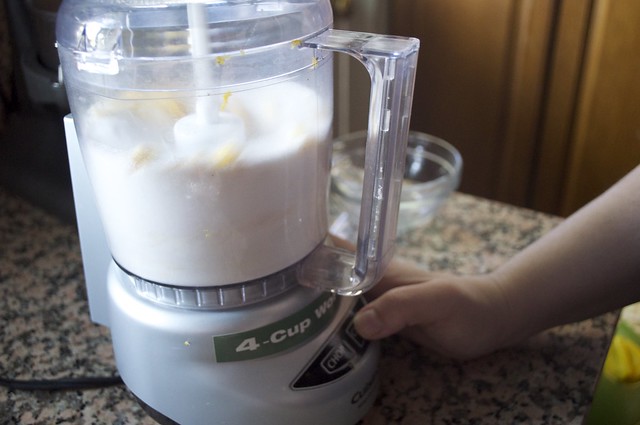 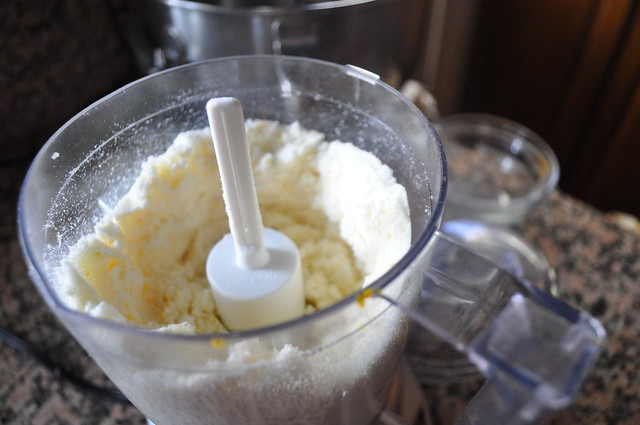 Cream together the butter and then mix in the butter. 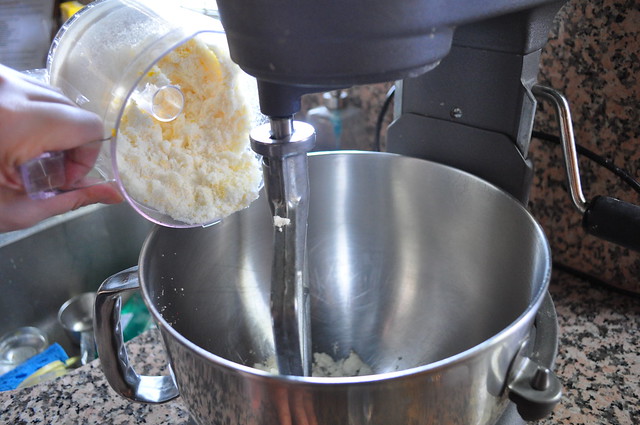 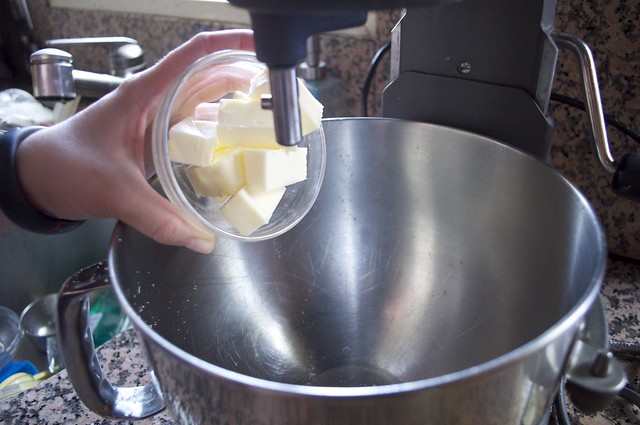 Beat in the eggs one at a time and then add the salt and lemon juice. At this step, the curd is going to look absolutely disgusting, you’re probably going to think you fucked it up. Don’t worry. It’s supposed to look that way. Trust us.

We don’t have pictures for this step, because honestly, when we did it, we (Marlee) thought we screwed up. So we stopped taking pictures, BUT KEEP GOING. IT’S WORTH IT.

Next, transfer the mixture into a sauce pan. Stir constantly over a low heat until the mixture starts to smooth out and eventually begins to thicken.

Check occasionally with a digital thermometer and when the temperature reads 170° you can remove from the heat. Cool to room temperature and then refrigerate. 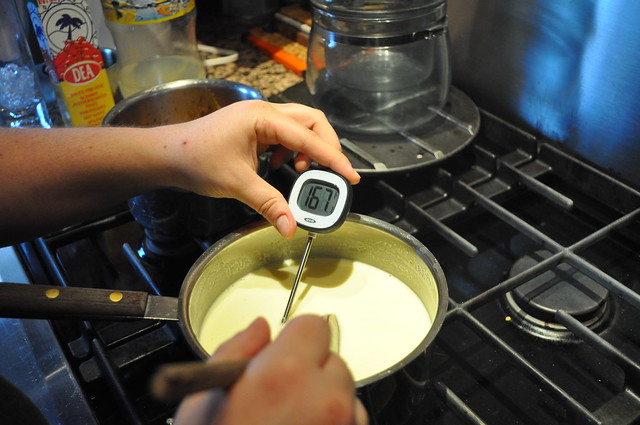 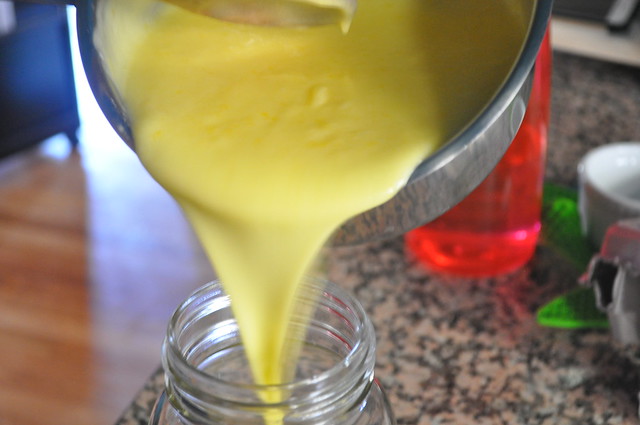 Look at how beautiful this is. So smooth, so creamy! So luscious! 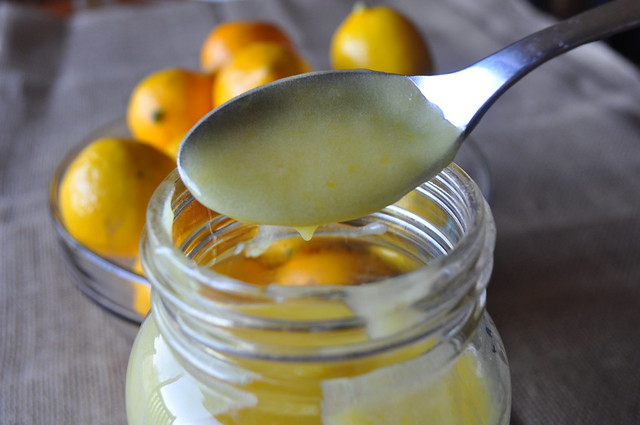