First off, we looked up potato salad to find a few historical tid-bits, but the first observation was that some people refer to potato salad as tater salad. That makes us think of a giant bowl of tater-tots tossed in some ketchup dressing (new idea? maybe not haha). Not necessarily a bad thing, just never heard of that way.

Anyways, potato salad has several ways to prepare it, from hot to cold, mayo to vinegar dressing. The cold potato salad that most of us know came from the British, while the warm vinaigrette Potato salad comes from France. And one of our favorites, the German preparation, hot vinegar with bacon dressing.

There are so many variations we might have to try each kind, but first here’s our New York aka Deli style potato salad inspired by Nate ‘N Al of Beverly Hills Deli. (if you ever have a chance go to Nate ‘n Al’s for breakfast or lunch, the corned beef is the best in the West) 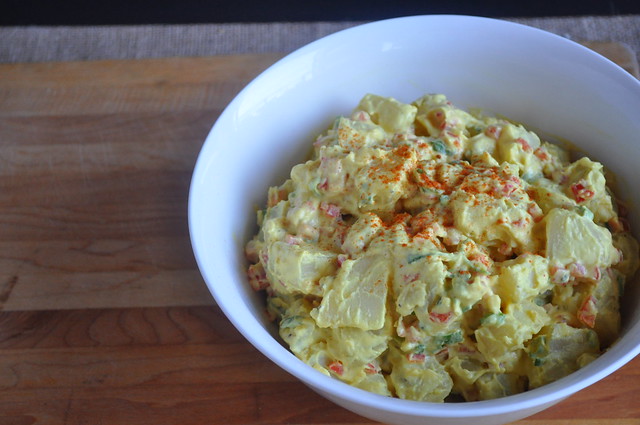 In a large pot of salted boiling water, cook the yukon potatoes whole until fork tender, but not falling apart. Drain the potatoes and set aside to cool.

While the potatoes are cooling, mix together in a small bowl, mustard, mayonnaise, relish and cayenne pepper. Mix well and set aside.

When the potatoes are cool enough to handle, cut them into medium sized chunks and put into a large bowl.

Mix in the diced red peppers, celery, and green onions. Next add about 1/2 the mayonnaise mixture and stir until combined. If needed, add more dressing and season with a little kosher salt if needed. Put the salad in the fridge and let the flavors meld for at least 30 minutes. 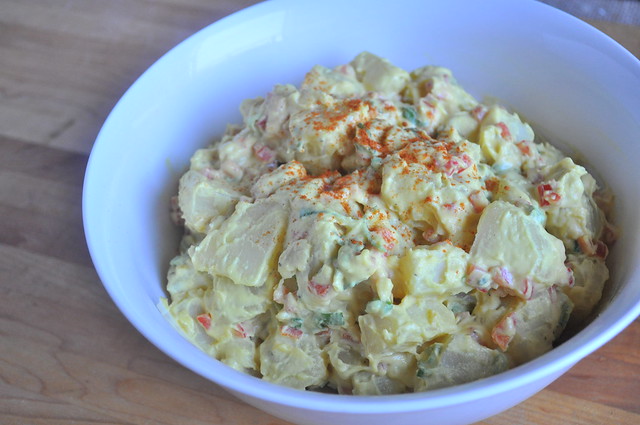