It’s Saturday and you know what you should make? Our classic and delicious marinara sauce. We know traditionally, most Italian’s make their sauce (or gravy) on Sundays but here at TYL, we’re a little non traditional so Saturdays are marinara day!

Besides, any good chef (or home cook) knows that a sauce, gravy, chili, stew, etc. tastes better the next day…so break out of the norm and make this sauce today!

There are many theories as to the origins of marinara sauce.  Most people would just assume that the moment Italy was formed BAM! there was marinara sauce, but no! It first appeared in an Italian cookbook in 1692.  Apparently the tomato was a fruit of the New World, and according to some theories, were brought over by Spanish explorers to Naples, a major port city.  Marinara means mariner or sailor, so some believe that tomato sauce was something that the sailor’s wives made when their husbands returned from sea to feed them.

Others believe that the sailors themselves made the sauce to bring with them to sea because the high acid content kept the food edible longer. One last theory is that tomatoes were used in place of a different fruit that might have been previously used in a pasta sauce, such as figs or apricots. Weird to think that tomato sauce is actually a savory fruit sauce!

Also, one possibility as to why some people call it tomato gravy, is because of the mother sauce tomate, where a roux is used to start the sauce.  A roux is traditionally used to make a gravy, hence, tomato gravy! Soon we’ll do an entire post just about the mother sauces, so stay tuned for that! 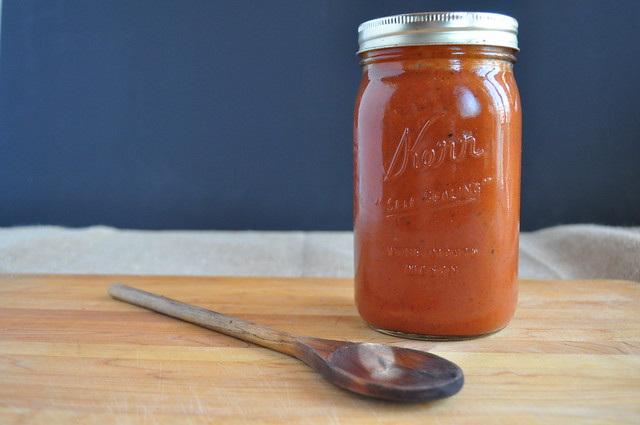 Pre-heat oven to 400°F.  Cut Roma tomatoes in half and place them in a bowl together, pour some olive oil on top and season with garlic salt and pepper. Toss them around until all the tomatoes are coated. Place them on a baking sheet and place them in the oven for 20 to 30 minutes.

Heat olive oil in a heavy bottom pot. Put smashed garlic into the oil until you can smell it, about 2 minutes. Then take it out of the oil and keep it until later. Add the onions and season with salt, dried basil and dried oregano. (add some rosemary salt if you want! Let it simmer for 5 minutes.

Open the can of crushed tomatoes and add it to the pot with the onions. Use a swish of red wine to clean out everything in the can. Let it simmer for 10 minutes.

Add 1 cup of red wine, but we always follow Queen Ina’s philosophy of there could never be enough wine! But if you aren’t as big of a fan of wine as Ina Garten, then feel free to omit it, and add more tomato paste in it’s place. Let it simmer again for 10 minutes.

Now that the Roma tomatoes are out of the oven, with a spatula transfer the tomatoes to the pot. Also, add the smashed garlic that you save from the beginning. Let them all party in the hot tub for another 10-15 minutes.

Turn off the heat and let it cool for 5 minutes. Grab the blender, and blend the sauce mixture in batches. Return to the pot, taste, add grated parmesan to your liking and any seasonings you feel need to be there. Enjoy! 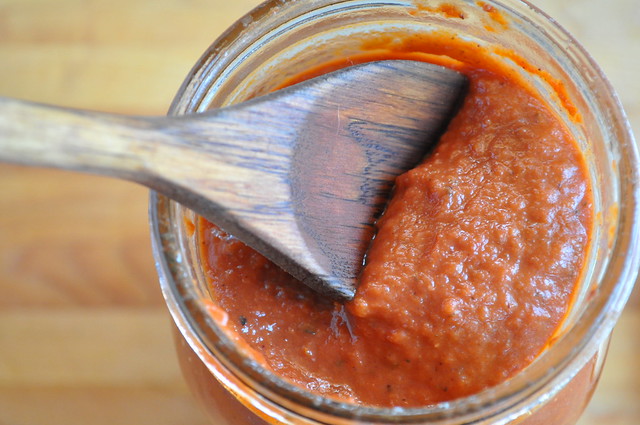